Britain is great, being British is fab, the Americans love us. In fact, they love us so much they are frequently pinching some of our finest things; they've nabbed the Beckhams, the X Factor and they're in the process of poaching football right from under our noses.

So at Diamond we've decided it's time to take something back, and what better bandwagon to jump on than that of National Ice Cream Month? Yes, you did read that right, the Americans dedicate the entire month of July to the delectable dairy treat that is ice cream. 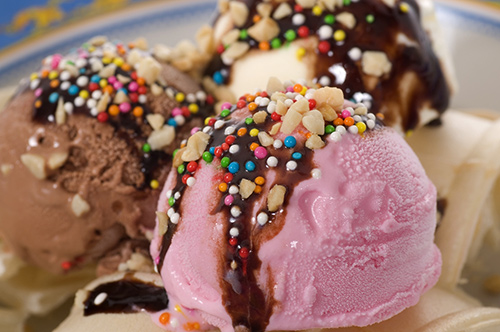 Well the decision to dedicate a whole month to the dessert was not made lightly, oh no this was not some online petition that got out of hand, this decision came right from the top. On July 9th 1984, President du jour Ronald Reagan made the proclamation that 'ice cream is a nutritious and wholesome food, enjoyed by over 90% of people in the United States'.

He described ice cream as a 'perfect snack' and said over 887 million gallons of ice cream was consumed in the United States in 1983. So, from the 9th July 1984 onwards, the month of July became the month of ice cream, with one day (this year it's Sunday July 20th) to be National Ice Cream Day.

We're not sure ice cream could really be described as 'nutritious' these days but we are happy to admit that ice cream is definitely the perfect snack.

We all scream for ice cream

Well, long before Regan was president and proclaiming a month in honour of the sweet treat, there was a lady called Florence Rappaport in Rochester, New York. Florence was mother to six children, and it was on a snowy February morning in the mid 60s when trying to cheer up her two youngest children, who were fed up of the chilly weather, that Ice Cream for Breakfast Day was born.

When her kids remembered the date a year later a family tradition came into being, and after being passed down to Florence's grandchildren and friends of her children the tradition became bigger than the Rappaport family.

Ice Cream for Breakfast Day is now celebrated in countries over the world including China, Germany and Israel.

Scoop it to me 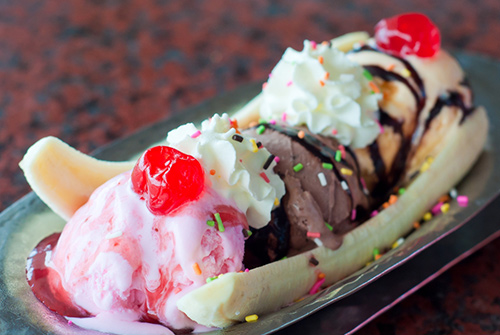 American cinema and TV have given us a nostalgic view of ice cream parlours and 50's diners, is it just us or does the mere mention of an ice cream sundae give you flashbacks to the movie Grease?

Ice cream is a big deal in America; you can hardly get through an American sitcom without someone suggesting they go out for 'a scoop' to cheer someone up.

Thankfully the ice cream love has spread to our shores so you don't have to book pricey flights just to get the ice cream parlour experience - unless you really want to because it's definitely worth it.

If you're looking to scout out some sensational scoops in the UK, then stop by Yorkshire Dales Ice Cream in Halton East, a family farm with Billy-Bob's parlour at its heart. Order a double scoop of Yorkshire rhubarb or black cherry.

If you live near Cornwall and think a trek to Yorkshire is a bit far for ice cream, don't worry just stop by Mr B's in Hayle to sample one of their many, many flavour combinations. Brown bread and marmalade, liquorice and blackcurrant, Jaffa Cake - Mr B's serves an ice cream for all tastes.

And if you happen to be a London lass, well you're spoilt for choice - from Gelupo in Soho, to La Gelateria in Covent Garden and Ruby Violet in Kentish Town. London girls are surrounded by ice creamy goodness.

Not sure about that one

We've all tried the classics, vanilla, chocolate, strawberry, mint choc chip, raspberry ripple, all of the aforementioned mixed together in one giant bowl (maybe that was just us) but what about some of the stranger combinations?

Garlic flavour? Smoked salmon and cream cheese? No to both? Maybe you'd prefer a big old scoop of haggis ice cream instead?

Oh yes, they really do exist, as do octopus, asparagus, avocado, olive oil, horse meat, Fois Gras, lobster and pear with blue cheese. The list of weird flavours is endless - candied bacon sounds wrong but we bet it's delicious, but human breast milk flavour on the other hand - think we'll give that a miss.

We're struggling to pick our favourite... what's yours? Let us know your fave flavour or weirdest combination you've tried by tweeting us: @DiamondForGirls